The U.S. Military Is Worried About China's Military Modernization (For Good Reason)

Key point: These weapons are on the top of any military's wishlist.

On January 12, 2019, the Defense Intelligence Agency released an annual report highlighting the radical reorganization of China’s People’s Liberation Army to become faster-responding, more flexible and more lethal than ever before.

The PLA was formed in 1927 as a Communist revolutionary force to oppose the Nationalist Kuomintang government and (later) invading Japanese forces. Unlike Western militaries, the PLA remains loyal to the Chinese Communist Party, not a theoretical independent Chinese state. A cadre of political officers (commissars or zhengwei) still operate at every level of the command structure to ensure loyalty and manage personnel.


Even after securing the mainland in 1949 and sprouting Navy and Air Force branches, the PLA adhered to a defensive “People’s War Strategy” which assumed that technologically superior foreign invaders (the United States or Soviet Union) would need to be lured deep into Chinese territory to be worn down by guerilla warfare and superior numbers.

Serious PLA modernization efforts began in 1991 when the trouncing of Iraq’s huge mechanized army in the Gulf War caused Beijing to realize its dated, World War II-style military was similarly vulnerable. By 2004, a new doctrine focused on proactively defeating enemies beyond China’s borders, including through preemptive strike if necessary, as well as undertaking global governance missions befitting its superpower status.

Between 2000 and 2016, while the Chinese economy averaged official annual growth rates around 7-8 percent, the PLA’s budget grew even faster at 10 percent. Despite that, the PLA’s current roughly $200 billion dollar budget totals less than one-third of U.S. defense spending. However, China pays much lower costs for hardware and personnel because of China’s “latecomer advantage” as the DIA report explains:

“China has routinely adopted the best and most effective platforms found in foreign militaries through direct purchase, retrofits, or theft of intellectual property. By doing so, China has been able to focus on expediting its military modernization at a small fraction of the original cost.”

By 2017, Chinese defense spending growth declined to 5-7%percent and the PLA shed 300,000 personnel, bringing it down to 2 million-strong—still the largest armed force on the planet. This transition sought to remodel the PLA into a leaner, more flexible force suited for fast-paced modern warfare.

Indeed, that year Beijing fundamentally restructured how the PLA worked, consigning the traditionally dominant ground forces to their own branch on equal footing with the PLA Air Force, Navy, Rocket Force, and a brand-new Strategic Support Force. This last addition combines satellite-launch and satellite-killing capabilities, with elite hacker and electronic warfare units to collect vital intelligence while disrupting the adversary’s own recon capabilities.

Rather than being siloed in their respective branches, operational units now fall under five regional commands, each with its own Joint Operations Command Center to enable air-, land- and sea-warfare branches of the PLA to rapidly coordinate using robust and redundant communication networks and inter-service chains of command.

The theater commands fall under the ultimate control of a Central Military Committee. The Army’s large division-sized units have mostly been dissolved, with assets devolved to seventy-eight combined-arms brigades mixing together armor and infantry with organic artillery and anti-aircraft units. Special forces and helicopter units also doubled in number.

The new organization allows lower-ranking officers to act more flexibly without depending on higher headquarters for orders and support assets. However, the transition is proving culturally difficult for the traditionally hierarchy-obsessed PLA and complicates logistics and training for units now combining several types of equipment.

Nonetheless, transforming rigid command and control and logistical systems, and rooting out endemic corruption, is one of the chief aims of the reforms. So is implementing realistic combat training emphasizing joint operations, instead of reputation-burnishing scripted exercises.

The PLA’s huge Rocket Force has a diverse array of over a thousand ballistic and cruise missiles armed with both conventional and nuclear warheads, most of them short- or intermediate-range weapons to strike targets in Asia and the Pacific, as well as a smaller number of inter-continental ballistic missiles that can reach U.S. cities. New truck-launched DF-21D missiles may uniquely boast the precision-guidance capabilities to strike aircraft carriers hundreds of miles away from China.

China’s arsenal of around 300 nuclear warheads is primarily delivered by the Rocket Force, but the PLA Navy also operates nuclear-powered ballistic-missile submarines, which may soon have the ability to strike U.S. targets without sortieing far from the Chinese coast. In 2017, the PLA reintroduced a nuclear role for the Air Force, likely to be fulfilled by the forthcoming H-20 stealth bomber.

However, Beijing has a no-first-use nuclear policy: it only plans to launch nukes if attacked with them first. A network of hardened underground facilities means the Rocket Force is likely to survive a first strike to inflict a retaliatory attack. China does not stockpile biological or chemical weapons.

The PLA’s strategic objectives have expanded from territorial defense to achieving regional military dominance over East Asia and the western half of the Pacific, as well as expansion into the Indian Ocean. Beijing eventually aims to displace or render indefensible the Pentagon’s East Asian footholds, notably island bases in Guam and Okinawa and alliances with South Korea and Japan.

Regional hotspots include a border dispute with India, potential instability in North Korea, and maritime sovereignty disputes with Japan, Vietnam and the Philippines. Beijing also requires the PLA to maintain a credible capability for invading Taiwan, including fighting off or deterring U.S. intervention on Taipei’s behalf. The PLA Navy operates Yuzhao-class Landing Platform Docks, and its Marine Corps recently tripled in size to around 35,000 personnel in seven brigades. The Army also maintains six combined arms brigades equipped with amphibious tanks and infantry fighting vehicles.

Operations other than war are also of increasing importance to the PLA, including suppressing protest and unrest in Tibet and Xinjiang—where reportedly hundreds of thousands of ethnic Uighurs have been placed in forced labor camps—as well as providing disaster relief and evacuating nationals abroad in emergencies.

Though the PLA is focused on fighting regional, not global conflicts, it’s developing a limited capacity for global expeditionary operations—particularly evident in the opening of its first overseas base in Djibouti. Beijing is preparing the ground for additional overseas bases in Pakistan, Cambodia, Sri Lanka and various Pacific islands. The introduction of huge new Y-20 “Chubby Girl” transport planes will significantly improve China’s global logistical capabilities.

These technologies and reforms have only begun to address longstanding PLA deficiencies in command-and-control, logistics, unrealistic training and lack of recent combat experience. Furthermore, while the PLA does field cutting-edge systems like the Type 99 tank, J-20 stealth fighter and Type 055 destroyer, roughly 40 percent of its armor and fighter units still use outdated 1950s-era hardware like Type 59 tanks, Type 63 APCs and J-7 fighters. The rapidly growing PLA Navy still relies on many noisy diesel submarines, and its two new carriers are less capable than U.S. nuclear-powered carriers.

Despite these weaknesses, the radical reorganization of the PLA shows awareness at senior levels that overcoming the PLA’s shortcomings isn’t only a matter of procuring better technologies, but changing how the military uses them.

Sébastien Roblin holds a master’s degree in conflict resolution from Georgetown University and served as a university instructor for the Peace Corps in China. He has also worked in education, editing, and refugee resettlement in France and the United States. He currently writes on security and military history for War Is Boring.
Image: Wikipedia. 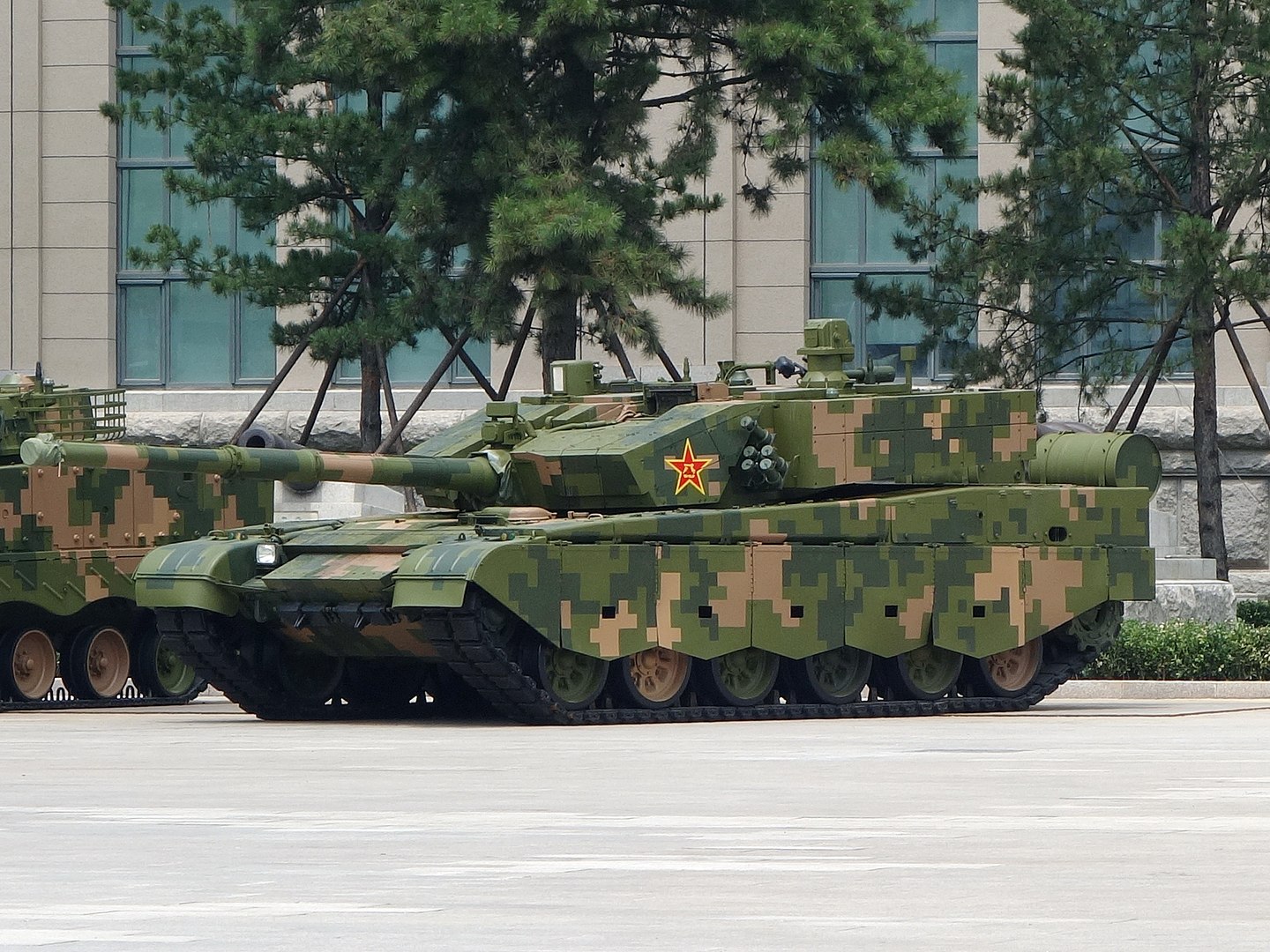 The U.S. Military Is Worried About China's Military Modernization (For Good Reason)